Our Purpose, Our Cause

Lay Apostolic Ministries with the Poor (LAMP) is made up of persons of all ages and walks of life who share the Catholic faith and share the call to serve through a ministry of presence and faith evangelization. We are called together by the Holy Spirit to move with Jesus and Mary’s compassionate heartbeat for the materially poor in the greater New York City area.

Through God’s grace working in LAMP, countless people have come to know Jesus and His love, and their lives have been transformed. Reminding them of God’s personal love, we help them rediscover their own dignity and goodness, enabling them to begin taking responsible steps in bettering their condition.

We support and strengthen the spiritual lives of the people we meet through evangelization and personal faith sharing. As missionaries, we learn from fellow LAMP missionaries, but we also learn from the people we serve who often teach and convert our own hearts. Serving the poors makes us spiritually stronger and reminds us of God’s love to properly fulfill our missions.

We are a community of Catholic lay adults who share the calling to serve and love the materially poor with the message of Jesus’s love. We live together in community and share a devotion to daily mass, prayer, and living out our faith through service of others.

Comprising both single men, women and married couples, our missionaries experience this call to a full or part-time commitment of at least one full year to assist in materially poor parishes,  serve with homeless families and evangelize at other sites of poverty.

We reach out to individuals who are suffering in different ways through our five ministries. With each ministry having its own focus, we are able to connect with those we are helping on a deeper level and form unique connections.

LAMP Missionaries contribute greatly to the individuals and communities around them by alleviating stresses and anxieties, filling a void with love and compassion, and serving as non-medical frontliners during a real time of need (COVID).

Read More about Our Ministries

In the late 1970s, Tom and Lyn Scheuring (+September 20, 2018) experienced a desire, which they believed to be a calling from God, to serve among the materially poor. From 1969 to 1971, they served in evangelistic outreach to runaways in New York’s East Village. They perceived the needs of the poor not only to be physical and psychological–but most of all spiritual. Faithful support of the materially poor was almost non-existent, yet so crucial to their well-being.

To test this call, they visited other established outreaches to the poor in Texas and Mexico. In December of 1978, Tom, Lyn, and their three children traveled to El Paso and assisted in a faith outreach ministry in Juarez. Mexico City was their next destination, where they experienced similar faith-oriented Catholic outreaches among the poor and expanded their acts of service.

Responding to a Need

After working in Texas, Tom and Lyn were uncertain about their next step. Having little money, they applied for and received a grant from the Oblates of Mary Immaculate, to serve in one of their very poor Mexican American parishes in San Antonio, as “Lay Ministers of Evangelization.” While serving at San Juan de Los Lagos parish, they understood the impact of their ministry.

They reflected on the need for lay missionaries to serve in poor parishes in the metropolitan New York City area. A ministry to facilitate such outreach was required, which they were inspired to create.

Tom and Lyn understood that there were poor parishes that couldn’t afford to hire someone to serve in evangelistic outreaches, but they also believed there might be other laypersons who wanted to serve the poor with an emphasis on evangelization. Over subsequent weeks, through prayerful reflection, they circulated their ideas to Church leaders across the country. After receiving a grant, they began.

The Start of “LAMP”

In seeking a name for this ministry, Tom & Lyn arrived on “LAMP Ministries.” The many scriptural references to the word “lamp” were significant, including John the Baptist being called the “bright and shining lamp” (John 5:35, preparing the way for Jesus). It also fit the acronym, “Lay Apostolic Ministries with the Poor,” which articulated the vision to which the Holy Spirit guided them.

Upon returning to New York, Tom & Lyn began developing LAMP. It was very important for the Scheurings that LAMP be clearly connected with the Catholic Church from its inception. They wrote to Terence Cardinal Cooke asking his blessing on their beginning of LAMP. They received his affirmative reply on March 25, 1981, inviting them to come to the Archdiocese to begin LAMP.  This date is considered the beginning of LAMP Ministries. The Scheurings then met with Archbishop Gerety of the Newark Archdiocese and Bishop Mugavero of the Brooklyn Diocese to receive their blessing and permissions to have LAMP in their Dioceses.

During that first year, a longtime friend of the Scheurings, Marybeth Mutmansky left her job as Campus Minister at Manhattan College to assist in the administration of LAMP when there were not even any funds to pay her. Mike Burke, an elderly shopkeeper in the Riverdale Bronx, provided a desk in his little store to serve as LAMP’s first “office.”

A call from the Holy Spirit to move with Jesus’ and Mary’s compassionate Heartbeat for the poor.

In 1998, Cardinal John O’Connor invited LAMP to a meeting of ecclesial movements where he asked each group to express what is the spirituality of their movement. Lyn Scheuring said that the ‘movement’ aspect of LAMP is the beating Heart of Jesus. That inspiration has become the cornerstone of LAMP’s spirituality.

LAMP’s movement is to be in unity with the beating Heart of Jesus, to be one with His longings, His love, His mercy. The beating Heart of Jesus became a symbol, an image, for us to contemplate as well as to appropriate in our ministries. It became a crystallization of the spirituality of LAMP. Being consecrated to the Hearts of Jesus and Mary means to really be actively in touch with the beating of Their Hearts of compassion for the poor.

The Eucharist, the Body and Blood of Jesus, is central to LAMP’s spirituality. The mission of the Church is in continuity of the mission of Christ and draws spiritual energy from communion with His Body and Blood. LAMP Missionaries participate in the Mass on a daily basis, knowing that it is our life support personally and necessary for fruit in our mission.

In 1999, LAMP Ministries received the Canon Law status of “Private Association of Christian Faithful,” through Cardinal John O’Connor of the Archdiocese of New York. This designation is an official recognition and affirmation by the Church of LAMP Catholic Ministries’ service of evangelization with the poor, and as an authentic way of holiness. It also affirms that LAMP embraces the Magisterial teachings of the Catholic Church. 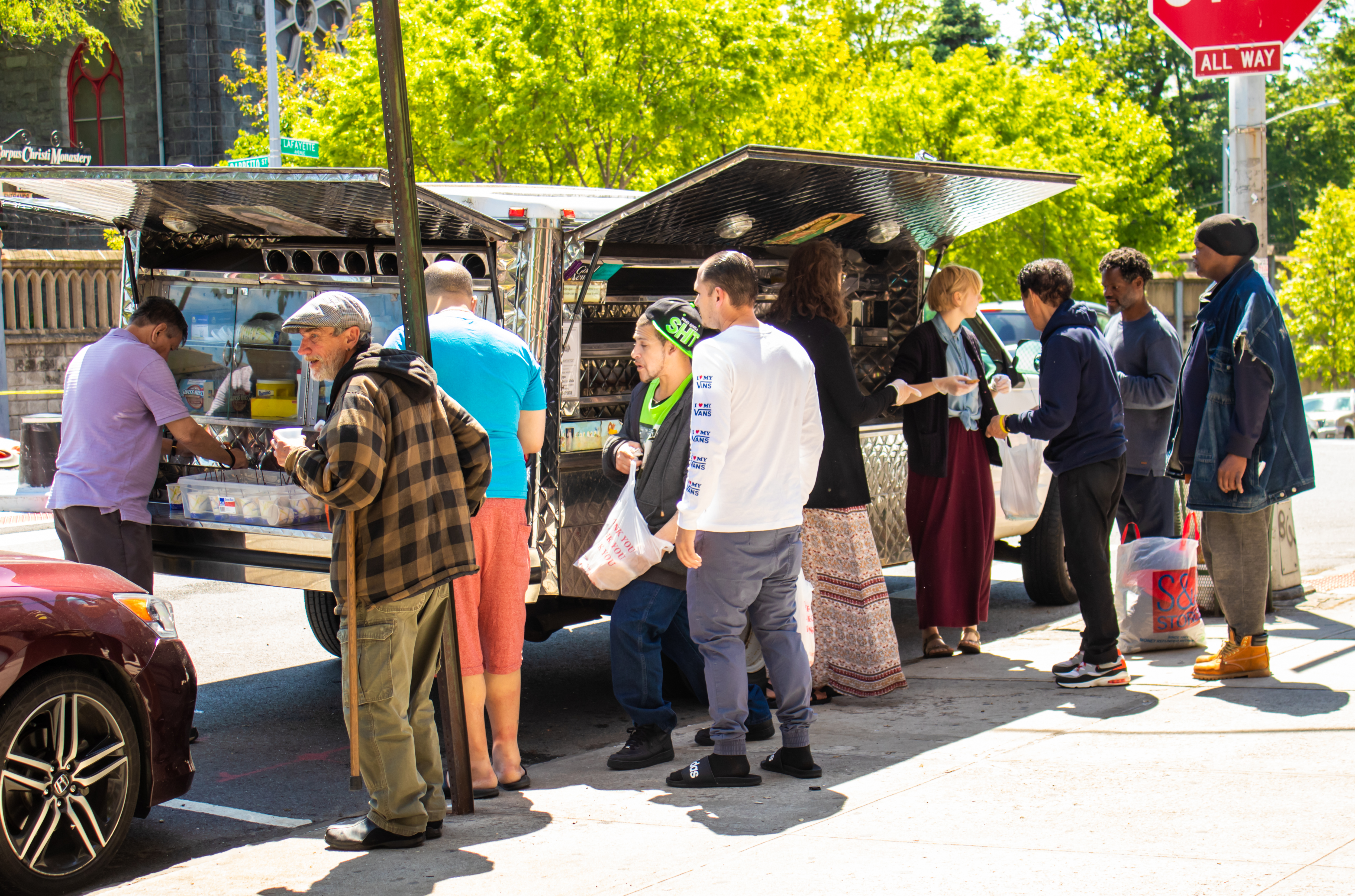 Help us continue bringing the Gospel of Jesus Christ to NYC and the Bronx.

Two for Joy: Spirit-led Journey of a Husband and Wife Through Jesus to the Father

Paradox of Poverty: Francis of Assisi and John of the Cross

The Poor and the Good News: Edited by Tom & Lyn Scheuring with Marybeth Greene

LAMP in the Media

LAMP is featured in Pentecost Today, “Evangelization Among the Materially Poor” by Co-Founder and Director Tom Scheuring.

LAMP is featured in Pentecost Today: “The Holy Spirit, “Father of the Poor” by Pastoral Co-Director Marybeth Mutmansky Greene

Our Archbishop, Cardinal Timothy Dolan joins us in ministry at the LAMPCafé, and the story of his visit is on the front page of Catholic New York! “Food and prayer”

LAMP’s founders Tom and Lyn are interviewed for Catholic Digest